Become a Member of our Exclusive Community 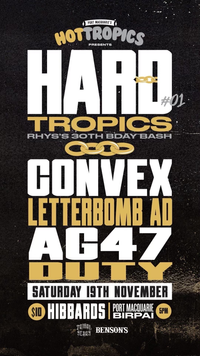 Born in Port Macquarie 2019 and reaching down to Sydney in 2021, The entire A.g (47) project is a hybrid of styles, refusing to be placed in a box the band like to experiment with different rock and rap genres and hopefully bring something new to the table.

On slide/rhythm guitar is James (aka Mister Morales), the glue that connects A.g (47) together. James' musical background is a checkered one. A self-taught punk rock guitarist, James just plugs in his instruments and turns it up to 11. Raised on progressive rock, James doesn't like to settle into one style of music and instead creates from a desire to blur the boundaries of a genre.

Dean Tuckwell brings polish to the band on lead guitar. Classically trained, Dean balances out James' outlandish ideas and reigns them into something more palatable. Inspired by the likes of Led Zeppelin and Jimi Hendrix, Dean brings the flavour of classic rock to the table.

Oli Harris on the bass, is a man of mystery. He swoops in last minute and bangs out some dope bass lines and leaves just as quickly.

Finally.... N.O de Veigh.... on drums. Wild AF. Was found living living in a toilet block, just so happened he could bang drums real good! Full Metacore fan, N.O follows in the footsteps of acts like Parkway Drive and Bring Me The Horizon, bringing a punchy backline of venom for the band to build off.

Become a member of our exclusive community!